When you have a headache or a cold, it’s easy to go to any drugstore (or even some convenience stores) and buy medicine to treat your symptoms. You won’t have a problem getting Tylenol, Imodium, Vicks, or Advil, and the cashier wouldn’t bat an eye over whether you buy one capsule or the entire box.

In other cases, however, your symptoms are not just everyday symptoms. Whether it’s extreme pain that regular painkillers can’t handle or a thyroid condition that’s making you palpitate, these are symptoms that cannot be explained as an everyday sickness and require more potent medicine you won’t find in any convenience store. But when you get to the drugstore, the pharmacists can refuse to give you medicine without a doctor’s prescription. And they’re legally capable of doing so because these special drugs require a medical prescription.

Today, we’ll help you understand the differences between prescription and over-the-counter medicines. We’ll explain how prescriptions came to be and how they protect the patient from overdosing or misusing antibiotics and potent active ingredients. To show this, we’ll be using Ketoconazole and its various product forms as an example. 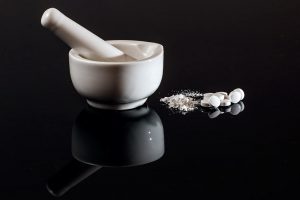 Originally, medical prescriptions were not a legal and medical requirement and was only a piece of paper where doctors wrote on the spot for patients with specific ailments. Before the 1950s, pharmacists had to compound medicine’s raw ingredients customized according to the patient’s needs. It was only after the mid-20th century when pharmaceutical companies mass-produced drugs and filled most prescriptions, though pharmacy compounding still exists for special needs.

Today, doctors can write out prescriptions for both over-the-counter and prescription drugs, the former due to drug medical plans that reimburse patients for their expenses if the medicine were bought due to the doctor’s orders.

Prescription drugs, however, are drugs that have antibiotics, a higher potency, or have the potential to be misused or cause an addiction. As such, your pharmacist won’t dispense these medicines unless specifically instructed by your doctor. These medicines treat more than just your everyday cough and cold, so you will need a doctor to look at your symptoms first before you can receive a prescription.

Parts of a Prescription

To avoid forgeries, prescriptions have a certain format that doctors fill out. The symbol “Rx” comes from the Latin word “recipe”. Back then, it was meant to tell the pharmacists what to compound, but in modern times, the doctor lists down what the patient needs and how much the pharmacist should dispense. The doctor puts patient instructions, their signature, and their registered number as proof of the prescription’s authenticity.

Who Can Give Me Medical Prescriptions? 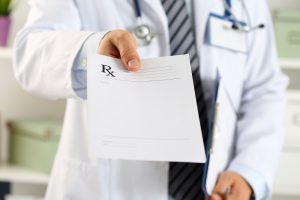 Regulations may vary according to countries, but in the United States, licensed medical physicians, psychiatrists, advanced practice nurses, dentists, veterinarians, and optometrists can give prescriptions. They are given a unique Drug Enforcement Act number that helps track down who authorized the prescription.

Why Do Antibiotics Need Prescriptions?

It’s easy to understand why strong painkillers, opiates, and other medicines require prescriptions to avoid substance abuse. But why are antibiotics controlled?

It’s because of antibiotic resistance, one of the biggest threats to global health and medical developments affecting all people around the world. Antibiotics treat bacterial infections, and doctors and pharmacists spend years studying how much antibiotics is enough to administer for a patient’s condition and the bacteria involved. But naturally, bacteria continue to develop a resistance to antibiotic formulas. It’s a race for pharmaceuticals to keep developing their products so that they remain effective even as bacteria become more resistant.

If bacteria in your body become antibiotic resistant, it could lead to higher medical costs, more treatment, and increased risk of mortality. And if more people carry antibiotic-resistant bacteria, it could spread an outbreak of infections before researchers can develop the right antibiotic for it.

One reason antibiotic resistance is accelerating more than its natural rate is due to the misuse of antibiotics. At any given moment, there are bacteria inside and outside your body. Patients who use too little doses of antibiotics or for non-bacterial infections allow bacteria to sort of ”train” themselves to become resistant to antibiotic ingredients. It’s like the way vaccines work: you inject weakened strains of a virus into your body and your white blood cells train how to fight against it, so you become immune to the disease.

Antibiotics need prescriptions because consuming more or less than what you need could lead to drug-resistant bacteria. Too little and you’re building up resistance, too much and you’re killing other good bacteria in your body that could lead to other health problems. Therefore, organizations such as the US Food and Drug Administration and the World Health Organization strongly recommend following prescriptions and never sharing or leaving leftover antibiotics.

Over-the-counter medicines are much simpler than prescription drugs. When you have everyday conditions such as a slight fever, colds, 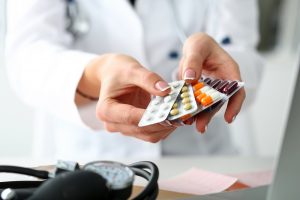 coughs, or body pains more often you don’t have to go to a doctor to ask for medicine. Within a couple of days of rest and over-the-counter medicines, the symptoms will subside. That’s because these are minor conditions that are safe and effective if you follow the directions given on the packaging.

Now, let’s look at one example, ketoconazole, and why some drugs require a prescription.

Ketoconazole is an antifungal medication used to treat fungi or fungal infections. This can treat external infections affecting your skin, hair, and nails, as well as internal infections within the vagina, lungs, and brain by preventing the growth of fungus.

You can get ketoconazole as topical creams, shampoos, intravaginal antifungal pessaries, intravenous antifungals, or oral medicine. These can treat several conditions such as:

You can buy ketoconazole creams and shampoos for topical use over-the-counter. These treat minor to moderate conditions such as ringworm, jock itch, athlete’s foot, tinea versicolor, yeast infection, and flaking, scaling, and itching scalp caused by dandruff.

These forms are much less potent but are effective for mild to moderate infections. While they should be used carefully, with some patients requiring doctors’ recommendation first, patients will not need a prescription to get these from their drugstore.

Two forms of ketoconazole require prescriptions: shampoos for severe cases of tinea versicolor, oral, and intravenous medication. Its shampoo is stronger and more potent than the over-the-counter variant. If you’re using prescription shampoo, you have to apply the shampoo only to the affected area and leave it there for around five minutes. It only takes one application, while over-the-counter variants take up to eight weeks to control dandruff.

Oral or intravenous ketoconazole requires a prescription because of the dangers it carries. While it is more effective and less toxic than fluconazole and itraconazole, oral ketoconazole comes with high risk of serious liver injury, with the results outweighing the benefits of it as an oral medicine. While it’s still available for prescription in the United States, oral ketoconazole has been discontinued in countries such as Australia and China.

Given its strong potencies and the health risks if they are taken in too much amounts, these products are not available to the public at request and are only given in cases doctors see fit to write a prescription for it.

While these products all contain a similar drug, there are both over-the-counter and prescription variants. The same applies to other types of drugs such as painkillers, and for good reason. Over-the-counter medicines contain less amounts of drugs and are generally less harmful in the long run. Because of the potency of prescription ketoconazole, on the other hand, it should be used sparingly and regulated to avoid additional side-effects creating more harmful internal and external conditions.

There are plenty of rules and policies surrounding medication dispensing and pharmacies – and for good reason. Your doctors are trained to provide the right kind and amount of medicine needed to make you feel better. If you need over-the-counter medicine, you can buy it easily from any drugstore, but be sure to follow the medicine’s packaging instructions. But if your doctor prescribes prescription medicine, be sure to follow the instructed dosage and avoid under or overdosing your condition.