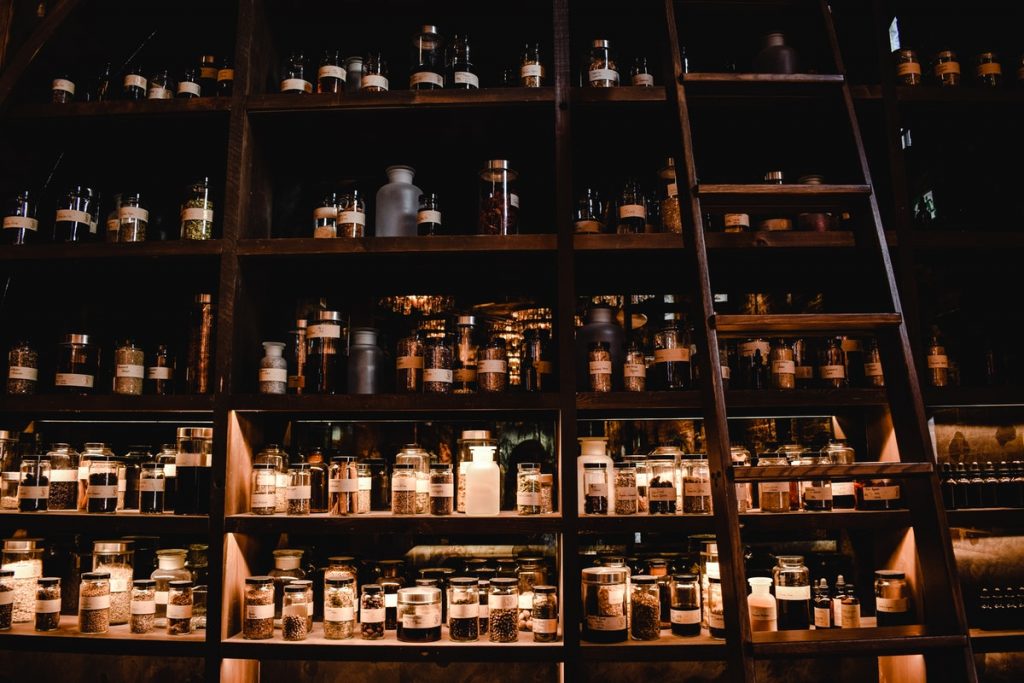 When you think of a place to get your medicine, you probably imagine lining up at your local drugstore and handing your prescription. Most people don’t imagine getting your Nyquil from a shop lined with apothecary jars filled with herbs and full. But a hundred years ago, everyone who could afford medicine went to an apothecary.

Today, the word conjures up images of musty apothecary jars, brass weighing scales and packets of mysterious powdered herbs, the images of a bygone era. But are they really all gone?

What is an Apothecary?

Originally, the term apothecary came from the ancient Greek word apothēkē which meant “storage house.”  Today, it means someone who mixes or creates medicines or their place of business. The term could have evolved from the fact that these medical specialists, especially herbal apothecaries, need large storerooms within which they can store the dried plants and other ingredients they need to make their drugs.

Before the introduction of retail pharmacies and technological advancements allowed the mass production of over-the-counter medicine, apothecaries were the only way people can access medicine. Unlike today when you can stroll up to a pharmacy and ask for some Ativan, people back then had to wait for someone to mix their medicines. Apothecary jars contained the herbs, powders and other ingredients needed to concoct medicine to someone’s specifications. Occasionally, they would also sell other exotic materials such as painting pigments. For centuries, whenever a doctor recommended a drug to a patient, they would proceed to an apothecary and wait while they mix the medication.

However, as the decades passed and scientific and manufacturing processes advanced, these stores were replaced by retail pharmacies where people can buy ready-made medicines. Today, the term apothecary is still occasionally used to refer to a pharmacist, most likely a compounding pharmacist. Or it can be used to describe someone who dispenses organic and natural drugs, like an herbal apothecary.

Despite what you may believe, there are still apothecaries around today.

Are There Still Apothecaries?

If you’re wondering if there are still apothecaries, the answer is yes, they are still around. However, the term is now considered archaic and only used in certain context. For example, it is often used in one of two ways. First, as a shorthand for compounding pharmacist and second as a term for pharmacies that dispense alternative or natural medicines.

Compounding pharmacies are the more direct analogues to the apothecaries of olden times. While retail pharmaceuticals allow millions of people access to drugs and supplements like melatonin, not everyone can use their products. Catering to the vast majority often means neglecting the needs of a few, and tis is where modern apothecaries step in. For example, if you’re supposed to take a vitamin in pill form but have trouble swallowing, a compounding pharmacist can mix that drug up for you in liquid form instead. If you’re allergic to an ingredient of the only commonly available headache medicine, a compounding pharmacist can make it for you without that ingredient. Modern apothecaries provide a vital service to people and receive just as much training as pharmacists.

Another way the term is used nowadays is to describe alternative pharmacies. These herbal apothecaries carter to people who prefer medicine made of organic or natural ingredients. Some may make headache medication directly from powdered willow bark or use various syrups to make vitamin supplements. Some of these stores also sell other organic products like vegan food, essential oils and natural cosmetics.

What Can You Find in an Apothecary?

Despite the existence of modern apothecaries, the image of these stores in the mind’s eye always tend to be the same: a small quaint shop with rows and rows of apothecary jars behind the counter. However, such displays belong to museums rather than in a pharmacy fit for the modern day. So what can you find in a modern apothecary?

Some of these establishments still have apothecary jars, but they’re more for show than anything else. The herbs and ingredients are kept in pristine and sterile containers behind the counter. While the shops of old would have weighed and measured these powders on handsome brass scales, today they would use a digital scale like everywhere else.

The merchandise in these stores have also greatly changed as well. Once, apothecary jars contained more than just herbs and drugs. They also occasionally mixed and sold perfumes, dyes for clothing and even ingredients for paints like lapis, cinnabar and other pigments. Today, they probably carry the same products you can find in a convenience store.

Although the apothecary jars and brass scales now belong behind museum in exhibits, apothecaries still exist. Whether they are mixing customized medications for a select few or making tinctures out of herbs, these medical professionals are continuing the traditions of their forebears.